Cracking down on hazardous chemicals

Wanted: Harmful chemicals. They surround you everywhere, yet you fail to notice them. Unknowingly, you flush them into waterways. And then they pile up in riverbeds, lurking in the mud as ticking environmental bombs waiting to go off. But thankfully, all is not doom and gloom. The Sullied Sediments project pioneered new ways to detect, capture, and face down hazardous chemicals on the loose.

Today’s world is laced with chemicals that are known or suspected to be hazardous. Many are found in consumer products; many others are part of industrial processes.

These substances may give you allergy, contaminate your drinking water, disrupt your hormones, or even cause cancer. As the industry develops a new chemical every 1.4 second, more than 90% of Europeans worry about harmful chemicals and their impact on the environment or human health.

The Sullied Sediments partners took up the immense challenge of getting to grips with this threat. For more than four years, the partners worked together to tackle unwanted chemicals found at the bottom of lakes and rivers. 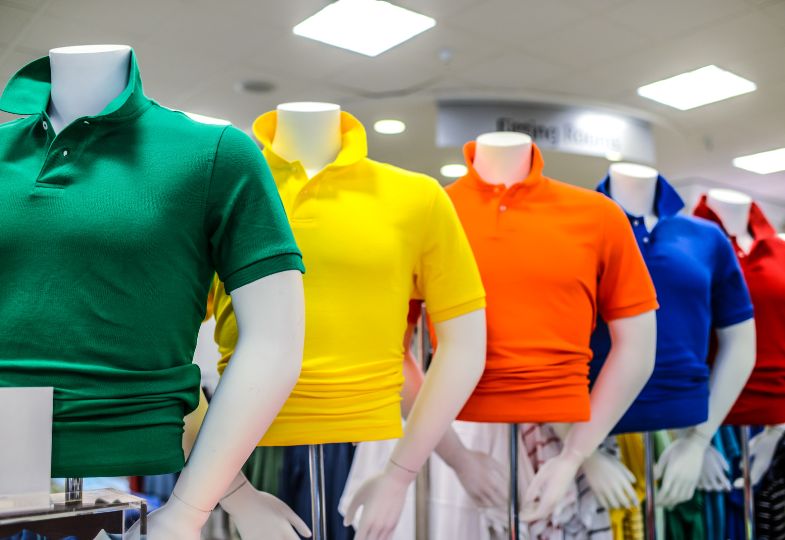 Hazardous and suspicious chemicals are found in a wide range of consumer products, from clothes to soap and toothpaste.

Jeanette Rotchell, today an Associate Dean for Research and Enterprise at the University of Hull, led the Sullied Sediments project. Specialising in environmental toxicology research, she loves a good detective challenge where poisons are concerned. ”I’m very interested in all things that make you die,” she remarks cheerfully.

Sullied Sediments explored how to manage unwanted chemicals found in the muddy floors of rivers and lakes. Some of these, like phosphate, are well known, whereas very little is known about others, such as the so-called EU Watch List chemicals. ”In this project, we tackled both the usual suspects and the new suspects,” says Rotchell.

While buried in the mud, the chemicals are rather inert. But unfortunately, they can be unlocked from this stable condition if the sediments are disturbed, for example by excavation or floods, and revert to a harmful state. This is set to happen more often in the future due to the growing risk of floods.

Watch the video below to learn more. It won a first prize in the North Sea Video Contest 2020 for best Explainer Video:

Sullied Sediments explored so-called EU Watch List chemicals such as diclofenac, oestradiol, and triclosan. Although they are primary suspects of hormone disruption and other human health issues, they are neither monitored nor regulated yet.

“The Watch List Chemicals are a very large unknown,” says Rotchell. “There is not a lot of agreement about how to measure them, whether they are in sediments or in waterways, and what levels they are at, and whether they are toxic.”

The partnership therefore developed methods to detect Watch List chemicals and went on to collect data from nine catchments across the North Sea Region.

”I’m proud of our work on the Watch List chemicals. What we were doing was relevant to the people that manage these waterways as we supplied them with key information. We couldn’t have done that without the combined expertise of the Sullied Sediments team, which included not only scientists but also regulatory authorities, managers, and businesses.” 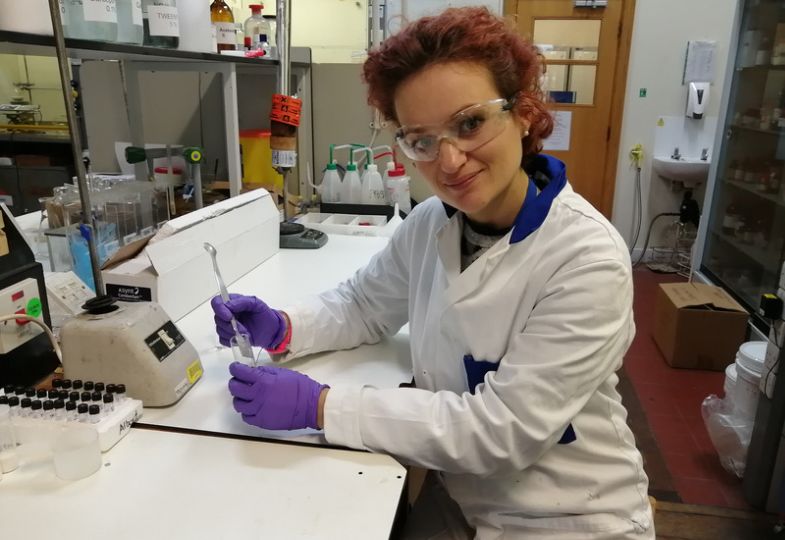 University of Hull PhD student Aimilia Meichanetzoglou conducting an experiment in her lab as part of a Sullied Sediments clean-up pilot. 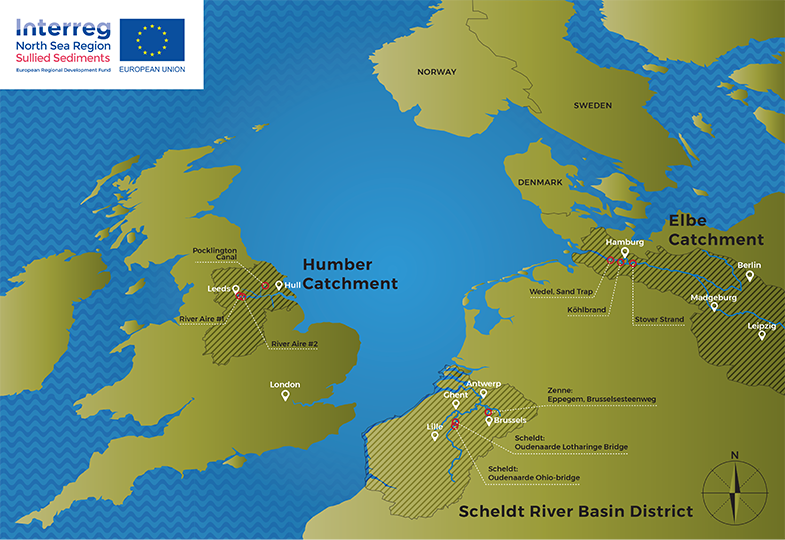 Sullied Sediments investigated nine areas within the larger catchments of the rivers Elbe (Germany), Scheldt (Belgium), and Humber (the UK).

Building a register of harmful chemicals

Registers of suspects and convicts are often indispensable in serious investigations. One of the problems in getting to grips with hazardous chemicals, however, is that such registers are few and far between. This is another area where Sullied Sediments made a pronounced difference.

Jeanette Rotchell: ”We produced a massive database from nine freshwater systems across Northern Europe with very different characteristics. We looked at many chemicals beyond the Watch List chemicals including also the old traditional legacy chemicals that contaminate waterways. So, we’ve got both the usual suspects and the new suspects in the register.” 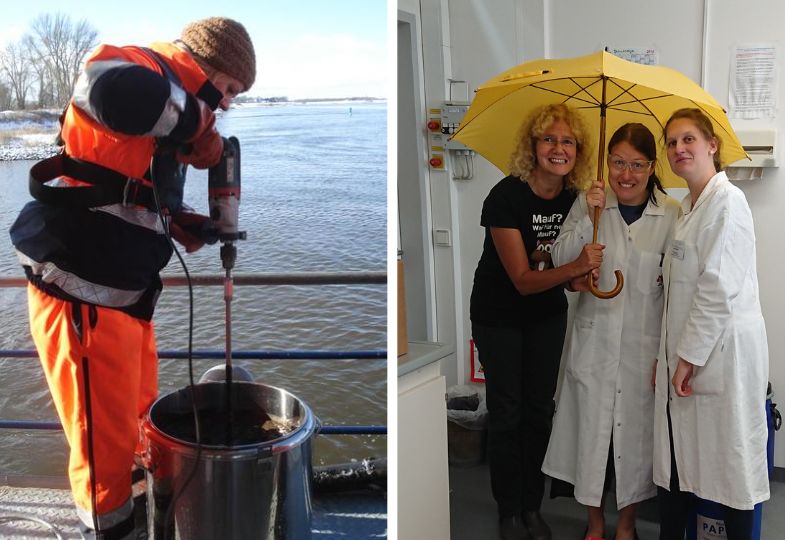 “That dataset can be used as a reference in the future. It is extremely useful because we did it to such a high standard. These are not just single snapshots in time. We actually went back over a yearly cycle at different seasons, so we have seasonal profiles. And we looked at very different waterways facing very different pressures."

Researchers from several universities involved in the project are working together on a scientific paper about the database.

I am very proud of the database because this is a game-changer. It’s a dream resource for anyone working with catchments. Nothing else like it has been done on this scale before.

To learn more, check out the preprint of a scientific article jointly produced by scientists from several universities involved in the project.

Enlisting the help of citizens

The team engaged citizens in collecting data and raising awareness of chemical pollution. To this end, they developed the RiverDip pad – a simple paper device that detects levels of phosphate and reads results via a colour change.

Volunteers were trained to use the pads and the custom-made RiverDip app to easily report their findings online via their smartphone. A website was a key tool in attracting and informing volunteers. The volunteers could follow the results of the citizen-led sampling here. This citizen science initiative caught the BBC's attention:

Hundreds of citizens collected thousands of data points from rivers in Belgium, Germany, the Netherlands and the UK, despite setbacks caused by the Covid-19 pandemic. This helped raise public awareness of how human behaviour affects the aquatic environment.

The app concept is quite versatile and has potential beyond the scope of the project. For example, Rotchell’s colleague at the University of Hull, Professor Nicole Pamme, adapted the app to work in soils. The app is now used to work with farmers in Kenya and Vietnam to prevent nutrient runoff and save costs. 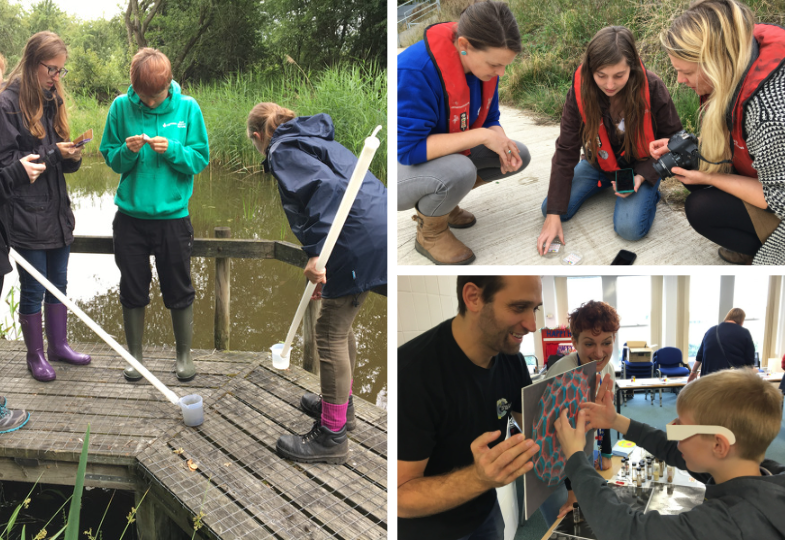 Sullied Sediments engaged strongly with citizens. Left and upper right: Trainers and volunteers in action. Lower right: A young participant at the Hull Science Festival uses 3D glasses to learn about a new  technology to clean up polluted water.

Of course, the job is only half done once you have identified your suspects and their whereabouts. You also need to catch them and lock them up. That is why the Sullied Sediments team developed a new, low-cost plant spore technology for deactivating unwanted substances in the aquatic environment.

Rotchell says the results look good: “In the lab, it removes 95% of phosphate and 80% of other harmful chemicals such as triclosan, diclofenac and estradiol. So there is proof of principle.”

Members of the team presented the spore technology at the American Chemical Society’s National Meeting in 2019 and the invention was covered by Forbes.

Due to the pandemic, the project was unable to test it in the natural environment. However, the researchers behind the methodology are seeking funds to realise this last crucial step.

Learn more about the spore technology in this video:

A great detox for Europe

On 25 April 2022, the European Commission published the Restrictions Roadmap that will essentially make up to 12,000 chemicals illegal. Dubbed Europe's Great Detox, this constitutes the largest ever ban on chemicals in Europe. The initiative is set to reverse the dangerous path of ever more chemicals with potential harmful effects spreading in the environment.

However, there remains a huge need to clean up the harmful chemicals that are still pouring into the environment as well as those hiding out in riverbeds.The Sullied Sediments partners discovered ways to tease them out and disarm them, garnering international interest.

Next, Jeanette Rotchell will give a keynote presentation at the North Sea project IMMERSE's conference in March, sharing learnings from Sullied Sediments with estuary managers, regulators, and policymakers. "It's great to know that our data is literally flowing into another environment," she says.

As the project's legacy is being taken up and further developed, the chase after toxins on the loose has only just begun.

Enlisting the help of citizens

The RiverDip pad and app were central tools engaging hundreds of citizens in the project. The concept was adapted for monitoring chemicals in soils, supporting sustainable agriculture in Africa and Asia.

The project created a unique database with high-quality data from nine catchments across the North Sea Region. The data cover both Watch List chemicals and other problematic substances, such as phosphate.

The team developed a promising low-cost technique to capture and remove chemicals on the loose in waterways. This innovation created a stir among the American Chemistry Society and was covered by Forbes.

The Sullied Sediments operated 2017 - 2022. The project engaged 24 partners based in the UK, Germany, Belgium, and the Netherlands. One partner - European Sediment Network (SedNet) - is European in scope.

They built a tight-knit partnership which enabled the partners to get past several major hurdles together, including Brexit and the Covid-19 pandemic.

They also collaborated closely with NuReDrain, another North Sea project. The managers of the two projects even joined each other's annual meetings. 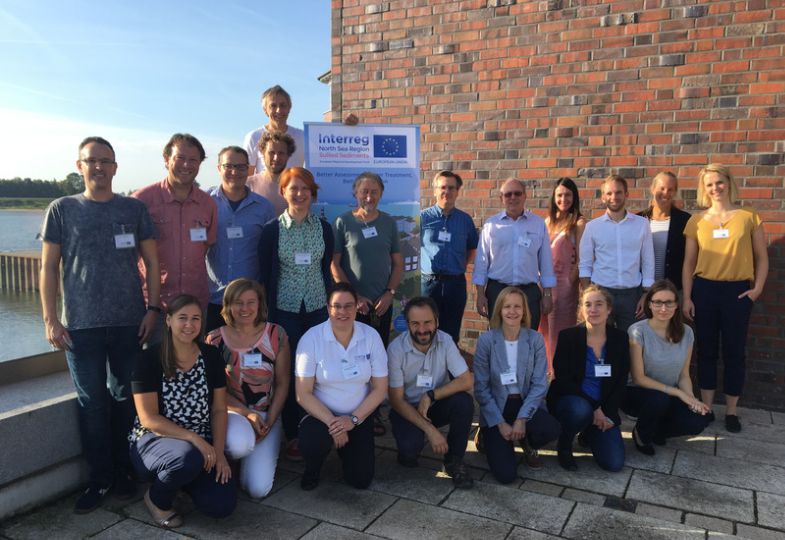 Above: Project manager Jeanette Rotchell (no. 3 from the left in the front row) with the Sullied Sediments partners.

Right: In Sullied Sediments, the partners bonded and got to know each other well, as shown in this fun infographic. 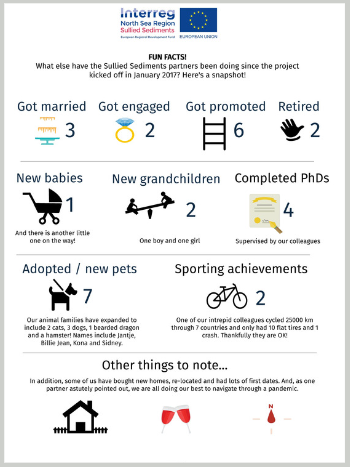 To find out more about this project, visit their website.

Feel free to use the following contacts to learn more about different aspects of Sullied Sediments:

Top image: A member of the University of Antwerp uses a grab sampler to collect sediment for analysis back in their labs.